I’ve been both triumphant and desperate, without actually having to call up a flatbed for rescue. However I am writing this a couple of hours drive south of the Loire so I am successfully getting about a bit.. and I love this car!
Here’s my early learning curve:

Once upon a time the range of EVs was well under 100 miles, and rapid charging points scarce, so the best use was a short commute and a home charge overnight. You’d buy a hybrid (petrol plus battery in various degrees) if you actually wanted to go anywhere, ie carting about two engines under the bonnet and paying for it too 😟. The futuristic company Tesla brought out their longest range all-electric, but you need to be rich for that one, and it has its own exclusive charging system – which I don’t think is very friendly, especially as Tesla drivers are now able to claim space on everyone else’s chargers too.

Nissan Leaf 2 has made 100 miles feasible in an almost affordable family car (inc govmt incentive) –  calculate 80miles for a safe bet.  So I got my Leaf figuring I could do all I wanted, given time, planning and a modicum of serendipity 😐.

This is the singular thing th 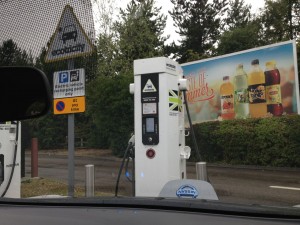 at makes a longer drive possible: a half-hour ‘Rapid’ charger supplied around the motorway network by Ecotricity, bless ’em,without which you’d be stopping for a four hour charge every 80 miles.

A week after meeting my Leaf I set off to visit my cousin in Southend-on-Sea. This needed my first serious route plan 😏 to ensure there’d be somewhere to charge at the right intervals. With that arrived full realisation of the consequences of getting it wrong: sitting powerless at the roadside needing an ignominious tow, or worse, a lethal bash while imprisoned on the hard shoulder of the M25 😟. Plus here’s an unforeseen drawback: you have to pull in to places you’d normally try avoid 😟 eg Clackets Lane Services. 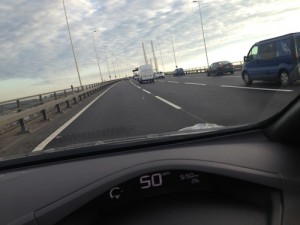 But I winged it successfully with a half-hour ChadeMo boost (those are the half-hour muscular chargers),  via the notorious Dartford crossing (preplanning meant I discovered its new system of wifi prepayment😀), experienced traffic jam zen with the silent engine and no-waste waiting 😎, found my cousin’s place (satnav worked well, you mustn’t get lost in an EV😟!!) back via IKEA (who have installed rapid chargers at their stores all over Europe😀) & all the way home, gliding in confidently with ten miles left on the clock😍.

Later that week I had a comeuppance 😧. I bought the Leaf from some nice people at Tunbridge Wells Nissan. I needed the domestic charge cable ordered for me – for when far from home with just a 3-pin plug for company – but they were hard pushed to deliver due to doubled sales target for Leafs & the numberplate update, so I cheerfully decided to go and collect it, I didn’t check the weather forecast 😕.

Nissan Tunbridge Wells has a fast charger but there was a queue😟, but what the hell I had enough to get home and I’d learnt you’ve got a fair bit of control by your driving style e.g. not using Air-con which conserves the charge level😐. I set off into the rush hour traffic, heading back to Brighton, intending to skirt around the town centre. The heavens opened. My intended road was closed by flooding, I diverted, I reprogrammed the satnav, did I get it wrong 😞? I ended up down some god forsaken country lane, windscreen steaming up, puddles ever deeper, darkness increasing. Suddenly realised I’d need lights, wipers, windscreen heater… And more charge than I had available😟😓.

For the first time I used the satnav to find a reachable quick charge 😐 and got out the book to make sure I re-routed correctly. I needed a place open 24/7, providing a ‘quick’ charge (otherwise night in a hotel) with a plug I had a cable for, and preferably somewhere I’d feel reasonably safe sitting around awhile in the dark😨. And so where else than West Sussex County Council Offices. I’d missed the Council staff, but there’s the blurry blue light of the charger and beyond that a local, & populated, sports centre. Plug in, then coffee, I thought.

But I had not before plugged to a ‘quick’ (earlier tech) charger which needs a lead that you carry around in the boot. Mine was still wrapped, never mind tried 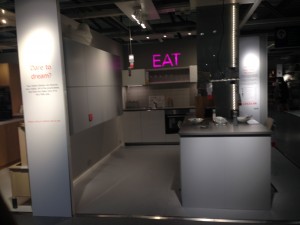 out. I tried in the dark and streaming rain to work out what could plug where, why instructed to ‘insert key’ when all I had was a card to identify myself as legit user, and how to know I’d got any of it working. Eventually I gave up 😢 and called the helpline. I will be forever grateful to the Charge your Car (CYC) volunteer on the line who held on and talked me through it all, solving a problem with the connection and instructing me what to look for and how to get charging. One of the problems was possibly that I’d got water in my electronic ignition key because it was showing up as missing for awhile, and without that key abandon all hope.

Got my frothy coffee & dried out for the hour or so needed to charge up enough mileage for home. Must do more study of the fat instruction book!