Solar power is an abundant source of energy, approximately 2.67 kWh per m2 per day, reaches the Earth’s surface. That 89 petawatts (add 15 zeros) of sunlight reaching the Earth’s surface is almost 6,000 times more than the 15 terawatts (12 zeros) of estimated power consumed by humans. The problem is how to harness, store and transport it.

Solar collectors can be especially effective in the South of England as can be seen from this diagram showing Annual Total kWh/m2 – the dark red represents 1200KWh/m2 and the lightest area 900 KWh/m2. A collector on your home can be linked directly to heat water or power some lighting (for example) and so provide comfort energy independent of the national grid, ie ‘free’ once installed, albeit dependent on the strength of the sun. Also in theory you can gain by selling spare power back to the national grid. 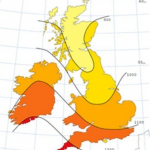 Heat map of the UK

There are several different types of solar panels, the most common of which in the building trade are: photovoltaic, flat panel and evacuated tube solar panels. There are links to the right which give you more information about these types of technology.

Finally it should be noted that recent years have seen the introduction of two measures that are designed to encourage the uptake of these two technologies – the Feed in Tariff for Solar PV, and now the Renewable Heat Incentive for Solar Thermal – both financial incentives make solar an attractive financial investment. See the individual pages for more detail.