So then Le LEAF and I went to France, but not without HOURS of research.

I know the route(s) pretty well as my destination is my gite in the Vendée which I have owned and loved for a dozen years. These days there’s a good Autoroute network from Dieppe, via an easy ferry out of Newhaven. All I had to do was to work out 80 mile chunks to pick up charge en route… I thought.

I discovered the French public charging network is both similar and subtly different:

• It is, as in the UK, midway between local and traveller provision, still fragmented, with gaps, and all too few Rapid chargers.

• The network has developed through various enterprises, EV manufacturers and funding sources, so not necessarily integrated. They are mostly set up to take on-line payment for a charge, so you need to make a deposit to register and be able to use. Most are free for now, but the threat is there!

• I needed French charge cards, available on line but set up for French information only and needing begging emails to send them to England. I’m lucky, I have a French address, phone line & bank account, 2 of the 3 cards were diverted successfully, one was helpfully sent to my destination.

• In France the most prevalent charger is a ‘Type3’, needing a cable to connect with a France-only plug, being an accélerée four-hour job which was spread over France presumably before the half-hour Rapide technology came on the market. Due to this alternatives are limited if a planned charger is hors de combat.

• France is a larger scale place than the UK, cities tend to be larger and further apart, so that 80 mile max target is harder, and the back-up of an interim booster often unavailable as the dreaded Type3 prevails. Nissan-Renault showrooms willingly lend a lead, but beware the 2 hour lunchbreak! 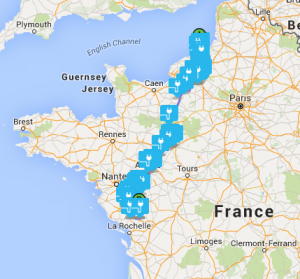 My most useful Charge Card: http://www.kiwhipass.fr/ Then, for me, my ‘local’ area has its own favoured supplier: http://www.sydev-vendee.fr/pages/bornes-de-recharge-pour-vehicules-electriques-ve.php. I gather a good network is soon to be installed Département by Département, will they turn out to each have different suppliers?

My most useful info point: http://fr.chargemap.com/points/searchRoute
This site works by inviting members to send in details of location, type and status of chargers, which is reassuring for up-to-date information. See the map above which is interactive and provides info & status on every borne, in anglais too.

My route looks good? All those nice blue chargers. Unfortunately these are ALL of them, from individuelle to Rapide, very few are the latter. One location just south of Rouen is key to the whole trip, different suppliers each side of the autoroute, and a major circuit via two Autoroute pay-stations to negotiate to the other side if one out of action.

So I chickened out of this long a drive for my first expedition and bought a ferry ticket via St Malô instead, just north of Rennes on the map, ie half the distance

PS there are NO Rapid chargers at Portsmouth Ferry port! If a full battery is needed when rolling off the gangplank then it’s a 24 mile round trip to Fareham before boarding.

Just maybe we need some integrated planning? don’t know how this can happen without the apparently dreaded word ‘nationalisation’. Maybe instead we’ll get a Beeching to cull chargers out in the name of bureaucracy, or perhaps a single monopoly owned by China?