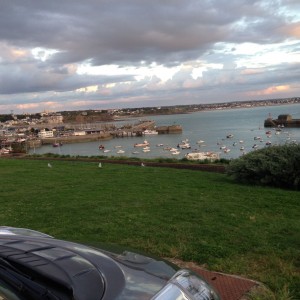 In September 2015 I set off for the first LEAF trip to my cosy gite in the Vendée, France – had a plumber booked to civilise its bathroom and, well, I just get itchy feet every couple of months. My Leaf doesn’t have Tesla’s battery power. My NEXT Leaf might though (can’t imagine owning an ICE again) as the latest forecast from Nissan is a 300 mile battery by 2018, so all may get easier. However my 600 mile round trip to France has done wonders to raise my immunity to “range anxiety” that well-known ailment of EV drivers….

…for here is the view in Granville where I finally got stuck!

The more-sea-less-road route by Portsmouth-St Malô meant 12 hours overnight on the ferry and no cabins available, and that meant my self-inflating mattress laid among the airplane-seat berths where EVERYONE snores, or hiding in some dusty corner as far from lights as possible, neither conducive to a good sleep before a long drive.

Hey ho, early breakfast and off the gangplank at 7.30 am  to a misty morning and my first charge-up. 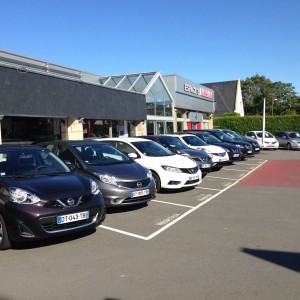 CHARGER No 1 : St Malô
Couldn’t find it!
The built-in Nissan Satnav (now christened Evie to give me someone to swear at) said over and over again near a padlocked factory gate: “you have reached your destination”. After circling about, and later, false trails suggested by people on their way to work, the battery was losing charge and I was stymied straight off the boat. Few things in life cause a steady heart-sink better than a missing charger.

At last a local Nissan garage: a  young man was helpful with coffee and a free plug to their slow charger. He also phoned around and discovered that rapid charger does exist but belongs to a factory which will lend it out on written application – or something, I was losing the will to translate. But yay, a few hours’ delay topped us up just enough to get to Rennes, so me & Evie were on the road at last.

I’ve since heard (from a Frenchman who borrowed my home charger on his way to Newhaven) that there’s a Rapid charger a bit further south in a basement carpark at Dinan, will try there next time.

CHARGE No 2 : IKEA in Rennes 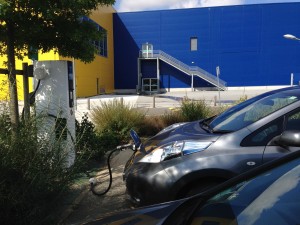 Much relieved to find it after only a few U-turns as getting scarily low on mileage again.  Half hour Rapid charge, sun shining, flask of coffee, biscuits! I love you IKEA and France. Discovered my carefully arranged french sim in old handset to enable searching out emergency chargers en route wasnt working. Ah well had the good ones  jotted down by hand. Later I also realised the Carwings link to Nissan was probably using a fortune in roaming charges as linked via my UK mobile, therefore turned mobile off, much to consternation of family and severing of link to NISSAN statistics. (Still looking for info on carwings & mobile billing – anyone?)

CHARGE No 3: en route to NANTES 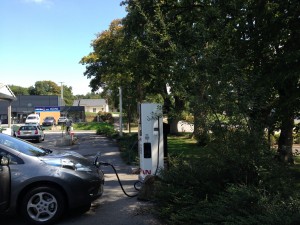 I needed an in-between cities charge, Evie took us into a small village that seemed very unlikely, but delivered us after a few false turns to this lovely Rapid among oak trees at a small supermarché & petrol station with the owner’s (?) Leaf parked nearby. Sunny. Sandwiches.

searching for CHARGE No 4: NANTES
Evie is Not Good on péripheriques. “Keep to the right” she says, meaning cross 3 lines of traffic and turn off sharp Right NOW.

I missed the slip road to IKEA Nantes but decided I could make it to the charger further south so tapped in new pitstop on the wing – mistake! Twenty minutes later we were lost again among a spaghetti of autoroutes, eventually stopping at an Aire with the only option to go north east, not enough battery to retrace, unsure how far it was to reroute to the southerly charger.

(forgot about taking photos for awhile)

Gnawed fingernails, got out old fashioned small scale map, finished the coffee, did many sums. Decided I had a chance if turned south, dependent on maxing battery preservation. Turned on warning lights and let the international truck drivers swear as I tucked between them going slow, just as well it was all in Serbian. Evie behaved – got us off the autoroute (ref instruction book) so could break down without hazard, and delivered me in the dusk right to the charger… to which someone else was plugged on the all night slow setting. I had now experienced the automatic shut-down to most efficient battery use plus warnings to charge immediately or else; my nerves were jangled.

CHARGE No 4: South of Nantes 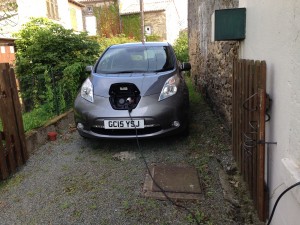 Dispirited again I contemplated an expensive bed at nearby hotel…..so had a medicinal beer while overhearing very dirty jokes between two english salesmen at the bar, they got a shock when I wished them an english goodnight. But a bit of luck! Frenchman turned up in response to the note I’d left on the Leaf, he only needed enough charge to get himself home locally in his Renault, he’d run short earlier on. We had a chat about being technology pioneers. I charged up to full in forty minutes, and rolled gently into my french garden at 10.00pm with 10 miles in hand, whew. Long day. 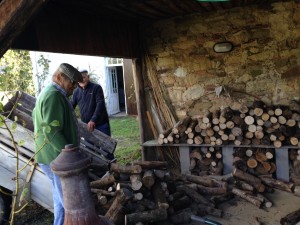 Plugged in with my euro-EVSE (domestic charger) and also found a ‘fast’ and free one in the local town which I used a couple of times. It seems that due to a higher voltage enabled in the French system a ‘fast’ street-charger only takes a couple of hours, unlike the four hours of our UK equivalent, useful to know. Nice relaxing week, weather fresh, plumber and stockpile of winter wood sorted – a more trad type of energy storage!

Rain and gales set in later though so I chickened out of a long Channel crossing in a force 9/10. More importantly, I didn’t want to drive in wind & heavy rain, I had learnt how much bad weather affects EV’s range. I switched my ferry to later & said yes to rerouting via Caen.

BUT, only after the ferry rebooked did I realise that southish Normandy (Orne, Mayenne, Sarthe)  is a charging desert, not just the Rouens-LeMans stretch which I’d avoided by going to St Malô, but out west from Rennes as well. Be warned: see that dark red area west of the green plenty that is Paris – that area has less than 10 slow chargers and nothing else – provides quite a barrier beyond the Channel ports.

EN VOYAGE BACK TO BRIGHTON: 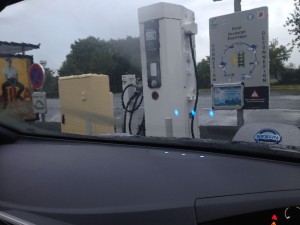 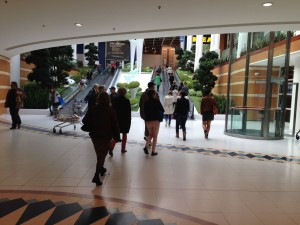 charge-card. Then Nantes IKEA, which has an enormous and mystifying carpark but indeed a Rapid charger in one corner. To Rennes as before, easy! I’d decided I could get from Rennes to Caen by diverting up into the Cherbourg peninsula to Granville where apparently a LeClerc supermarket offered loyalty card holders fast-ish charging, then to a Rapid at a Nissan garage in St Lô and thence to Caen where another Nissan garage might give insurance to reach the port.

At Granville trouble set in. A notice at LeClerc said I must register in the store before charging, it was getting late. Help desk madame said it was only for local shoppers & my card was from Fontenay, Vendée, I argued, madame relented, I registered & signed, ah but it takes 24 hours to pass the system. WHAT? Phone calls to head office finally cleared me to go, so triumphantly to charger…. which wouldn’t work. Technician on his way home opened it up, looked at tangle of wiring, Gallic shrug & directions to local Renault garage. (I now suspect my card needed some money put on it but madame didn’t know how to do this.) Garage people friendly but they only had a very slow charger, I was out of time to make the ferry, they were worried about leaving me plugged in after hours because of their insurance, fair enough. This time it had to be a hotel. The receptionist at Ibis Hotels at the port was horrified at the suggestion that I could plug my car into one of their domestic power points. I suspect many problems are down to people just not knowing about this new technology, and having it presented to them by an Anglaise was just all round too difficult. Horrid microwaved snack, very lovely glass of Bordeaux, a shower and bed. 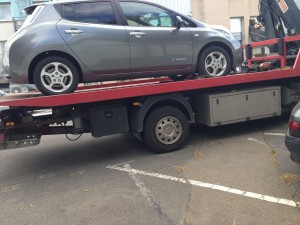 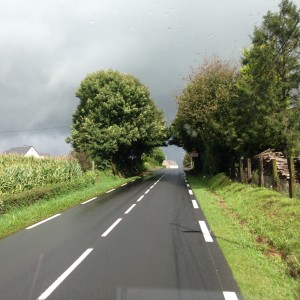 I phoned in the morning, “within the hour” said a reassuring scotsman, we will contact the French service for you. Sure enough a flatbed arrived, loaded us up, and off to St Lô. So easy, pleasant chat in truck about EVs, life, et al. 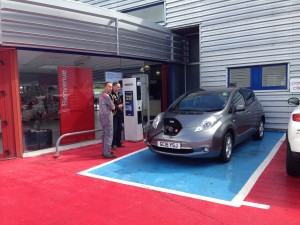 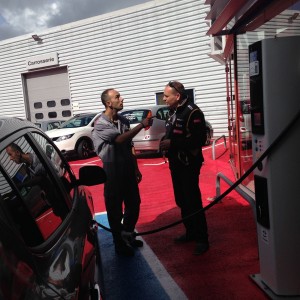 I asked about next stop charging at Caen & was promptly introduced to the owner of the Caen-Nissan garage who happened to be visiting. He assured me their Rapid charger was up and running, and so it was.And so I’m in love with France again.

And, je regrette, across La Manche to home.

Will do it again now I know the pitfalls, but maybe not in winter. I’m thinking I might try out the lend-an-ICE service in December. This is another inducement by Nissan: a fortnight of  free Internal Combustion Engine per annum for holidays abroad…get it while it’s there? Or is that just too treacherous to Evie?