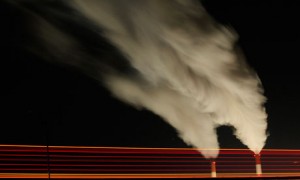 Carbon dioxide emissions from industry rose an estimated 2.6% this year, according to a study of global carbon emissions. This article was printed on the Guardian Website – Dec 2012 – http://www.guardian.co.uk/environment/2012/dec/03/co2-emissions-climate-change-certain

The research by the Global Carbon Project, an annual report card on mankind’s CO2 pollution, also says emissions grew 3.1% in 2011, placing the world on a near-certain path towards dangerous climate change, such as more heat waves, droughts and storms.

The finding will give renewed urgency to the nearly 200 countries attending international climate talks in Doha, Qatar, which run until 7 December and aim to galvanize ambition in fighting climate change by limiting warming to below 2C, a goal nations agreed in 2010. Temperatures have already risen by 0.8C since pre-industrial times.

“I am worried that the risks of dangerous climate change are too high on our current emissions trajectory. We need a radical plan,” said co-author Corinne Le Quéré, director of the Tyndall Centre for Climate Change Research in Britain and professor at the University of East Anglia.

Total emissions for 2012 are estimated to be 35.6 billion tonnes, researchers said in the study, published in the journal Nature Climate Change.

Current emissions growth is placing the world on a path to warm between 4C and 6C, says the study, with global emissions jumping 58% between 1990 and this year. The study focuses on emissions from burning fossil fuels and cement production.

A few big developing nations are fuelling the emissions growth, the study says, even though the global financial crisis spawned long-term green stimulus plans by China, India, the United States and others to attempt to curtail CO2 output.

“Unless large and concerted global mitigation efforts are initiated soon, the goal of remaining below 2C will soon become unachievable,” say the authors.

Globally, the improvement in the carbon intensity of economies, a measure of carbon emissions per unit of gross domestic product, has stalled since 2005, according to the study, which analysed data from the US government, United Nations and statistics from the oil company BP.

Emissions in 2011 from coal totalled 43%, oil 34%, with gas and cement production making up the rest.

The authors say while it was technically still possible to limit warming to below 2C, emissions growth would have to rapidly come to a halt and then fall quickly.

Each year of 3% emissions growth made achieving the temperature limit even less likely and ever more costly. It would require a rapid shift to greener energy and even net negative emissions in the future, where more CO2 is taken out of the air than added.