Micro generation (Combined Heat & Power) is the simultaneous production of useful heat and power within the home. It works very much like the gas boiler in a central heating system and heats the home in just the same way. However, at the same time it generates electricity as a by-product, some of which you will use in your own home, the remainder is exported to the national grid or set up to be shared with your neighbours.

The system generally uses natural gas to produce heat & electricity. A total of around 70-80% (Gross Calorific Value) of the energy value of the gas is converted into heat, principally in the form of hot water which is used for space heating and domestic hot water as in a normal central heating system. Between 10-25% is converted into electricity, and the remainder (5-15%) is lost in the flue gases.

Micro-CHP units are about the same size as small domestic refrigerators or floor-mounted boilers, and are similar in appearance. They are predominantly gas-powered, delivering between 1-3kW of electric power (1-3kWe), and 4-8kW of heat (4-8kWth). In currently available systems, heat is delivered to radiators by hot water, and domestic hot water is supplied by a conventional indirect storage cylinder. A micro-CHP unit can be connected into an existing wet heating system, often as a replacement for an existing boiler. 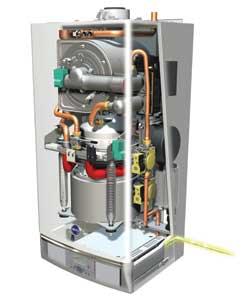 Dwellings are unlikely to require significant alteration and disruption to the occupants is minimised. Micro-CHP systems with higher thermal outputs will help with hard-to-improve dwellings (those with solid walls, solid floors and no loft space), where there is a relatively large heat demand and energy efficiency measures are expensive. In this case, micro-CHP will produce fewer carbon emissions than a condensing boiler and despite its cost will overcome difficult problems such as high-rise social housing.

It is possibly a technology that will develop and become cheaper for individual installations.