Thought I would post this up here – thanks to @Greenenergychap on Twitter – House of Commons Report – I am a particular fan of their continual use of German as the shining example of how the FiT must come down – but interestingly Germany have shown quit a significantly larger amount of installations than the UK: 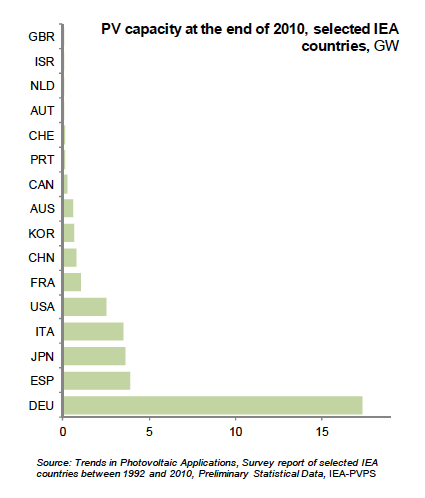 You can see Britain at the top of this Graph and Germany at the bottom. Quite a difference?

And the Germans have brought their tariff down now, and are only planning to reduce it by 9% per annum for the next few years based on the level of new installations – seems like the UK Govt are not comparing apples with apples?

I think its most important to realise that no one has fundamentally disagreed that the rates had to come down, but by bringing the whole deadline forward 4 months to the 12th of December – not only were they acting illegally, but irresponsibly.

If you own a company in troubling economic times the last thing you need is further uncertainty.

As the self professed champions of industry and the “greenest government ever” the ConDems have really shot themselves in the foot.