So, I passed the “just go for it” stage, made mistakes, found out how to make stuff work by guess, trial, and error. This included how to drive with my left foot tucked under the seat so I didn’t slam it down on an imaginary clutch – I have not driven an automatic transmission before – if it has transmission in the usual sense – straightaway a tech question mark…doh!

Indeed when I arranged insurance I was stymied by the question: “what is the engine size?” Lamely I replied “not sure it has an engine, it’s got batteries”. I like to know how to maintain and use my cars but any tinkering under the bonnet stopped after my beloved minivan sometime around 1972. However this time I have leapt into a new technology which deserves better answers than that.

THIS is under the bonnet: 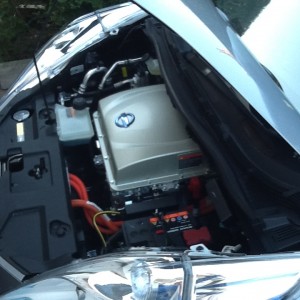 There’s usual stuff like window washer fluid, brake fluid reservoir, a 12-volt battery (to run systems & lights), fuses, coolant tank, etc, and a ‘power delivery module’. The power to the traction motor is provided from a Li-ion battery which is located as an array within the chassis underfoot.

Here’s a fine YouTube video showing the motor unit being dismantled, the intricacy compared to my minivan (itself once an icon of modern design) is a joy to behold.
https://youtu.be/4GG3QRPGlPc

Now having got the car home, charged it up from the purpose-installed wall charger, played with the lights, locks, hooter, displays, the ‘approaching vehicle sound for pedestrians’ and done a bit of joy riding around town, the thought occurs: how do I get beyond the 40 mile radius comfort zone?

I cannot say the full implications were clear to me during purchase, but I may not have been listening carefully enough – you don’t when it’s love at first sight after all.

A/ Beyond comfort zone means relying on a new network of roadside chargers, installed haphazardly and still in development. There are different types, styles, means of access, and a lot of design in progress. Reliability is a perennial problem and you could well get stuck with a low battery through no fault of your own. I gather maintenance response can be inconsistent. For this very reason free “Nissan EV pan-european roadside assistance” exists, I suppose when petrol stations were in their infancy this was provided by the chauffeur on his bike with a petrol can! 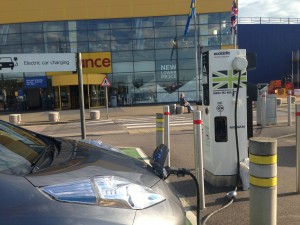 B/ Access to the chargers is achieved via pre-arranged identity cards, some exclusive, some shared across a few networks. I was supplied with an Ecotricity card with the car, this accesses the network set up around motorways by this splendid renewable electricity supplier, though with some gaps still      http://www.ecotricity.co.uk/for-the-road.

A few examples exist of open-to-all chargers, eg at IKEA stores, though sometimes they too require a card to set them running. Indeed it is good to need your own card to unplug once charged, not a big issue yet but I can see pressure from charger queues rising pretty soon. I now have a collection of seven cards, 4 are French, but I may need a couple more UK ones when I go further north or west.    http://chargeyourcar.org.uk/

Mostly charging is free, so for the time being you can travel for free across miles of countryside – in theory!

C/ Different types of charger require different plug-in combinations. The Rapid (half-hour) chargers have their own ‘tethered’ plug, only later EV models can take this high amp charge. My LEAF came with a cable to plug into four-hour chargers as used in the UK which fits my home wall charger. I also got a domestic plug-in cable, ie it has a 3-pin at one end and the right plug into the car at the other. I bought another one of these to fit French domestic plugs, maybe it can be done with an adaptor but I‘m nervous about electrical connections, especially when you are quite likely to be using them in bad weather.

SO, not so simple!

Two brave guys spent last weekend travelling from John O’ Groats to Land’s End and back in a LEAF, they took 57 hours, setting a record. Well done fellahs! Proves the infrastructure is there…. Just about. But it’s good to be a pioneer of zero-emissions technology!

I still love my LEAF for all that.

..and next – Le LEAF goes across the water